Support and resistance levels are an invaluable technical analysis tool in any financial market, especially forex.

Why support and resistance levels are important

Support and resistance is probably the first thing you learn when beginning your trading journey; it’s one of the many ways traders can interpret supply and demand from charts, and supply & demand is what ultimately moves a market.

Weak vs strong support and resistance 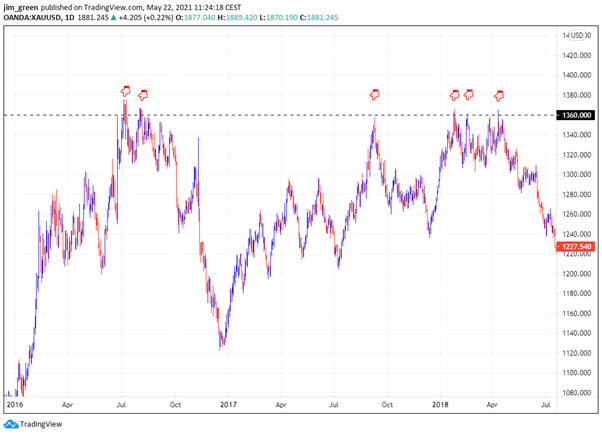 In the chart above, we have a strong resistance line for gold at $1,360, where the price touches this level six times over two years. Each time the price approaches or passes the line, it’s rejected and falls back.

This show buyers were unwilling to pay much more than $1,360, indicating the peak of gold’s value. It wasn’t for another twelve months until the price finally broke this level.

What makes this example a strong resistance level isn’t just the number of attempts to break the line or the timeframe but the extent of the price swings approaching the levels. 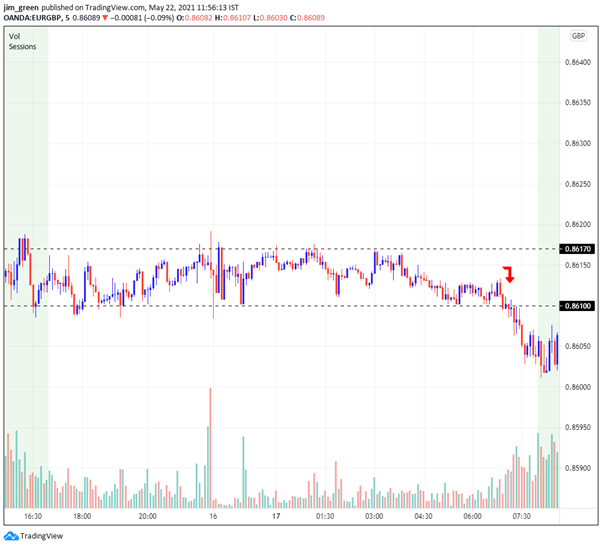 The image above shows weak support and resistance levels. Firstly, we’re looking at a five-minute EUR/GBP chart between 17:00 and 08:00.

The price is simply bouncing between a 7-pip range. As the market approaches the start of the session and volume increases, the price effortlessly breaks through the support. 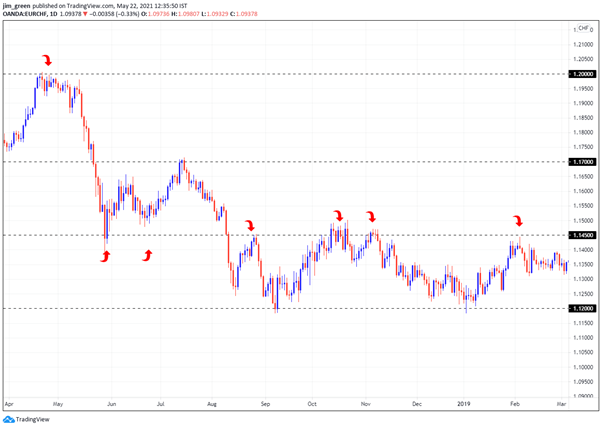 In this EUR/CHF daily chart, we see an example of how strong support and resistance levels reside by round numbers.

Going from left to right, you can see strong resistance at the 1.20 level. On two consecutive days, the level is touched, and the price fails to advance for the following two weeks.

Look at the 1.145 level to see this in action. Although this level doesn’t start as a perfect support line, it becomes a resistance level that’s tested several times over six months.

In this article, we looked exclusively at static horizontal support and resistance levels. Depending on the instrument and timeframe you’re trading, you might find you can discover stronger levels using trendlines following several swing highs and swing lows to find support and resistance within a trending market.

For more advanced traders, a Fibonacci retracement tool might differentiate stronger and weaker levels. And finally, a popular technique is to use dynamic support and resistance levels. A common indicator used for this is the 50-period simple moving average.

Whether you are using support and resistance or other methods, you can look to improve your trading with our top-rated systems that have passed a live trial on the site here.

What is the Best Forex Signal Telegram Group?
How to Use the Supertrend Indicator
Bill Lipschutz Trader Profile