The constant price movement of a financial instrument creates different price patterns. Traders use these patterns to anticipate the market direction.

Likewise, in a downtrend, the closing of the last five candlesticks in green indicates a bullish signal. The confirmation of the pattern is considered strong if the last two candlesticks take a decisive direction.

The idea of the Sushi Roll Pattern

The sushi roll is a reliable pattern and the idea of the pattern is to identify a candlestick structure that shows a change in market sentiments. The higher highs or the lower lows in the pattern indicate the loss of patience in buyers or sellers. It happens for several reasons like economic and political events, and that eventually causes the ongoing trend to reverse.

The sushi roll pattern confirms a reversal and the start of a new trend. The firm confirmation provides a larger outlook of the market. For instance, a change in the weekly or monthly trend also changes the sentiments on the daily chart.

The sushi roll pattern is one of the early indicators to spot a change in the trend and it can be applied to any market including stocks, commodities, and Forex. It can also be applied on various timeframes like hourly, daily, and weekly.

The pattern also assists traders to exit trades on a reversal indication and adjust their position accordingly.

Similarly, in a downtrend, the first five candlesticks should be small. Their color does not hold any significance but their size should be consistent.

The following chart of Apple Inc. is an excellent example of a bullish sushi roll pattern. The stock price was in a downtrend from $163. However, after a significant drop, a sushi roll pattern was formed at the bottom.

This candlestick formation completed the pattern and indicated a bullish reversal.  Soon after the indication, you can see the trend reversed in the coming sessions and the stock price once again moved above $163. 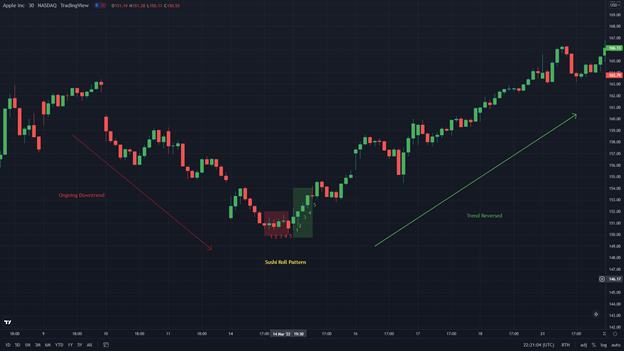 However, the next five candlesticks are bearish and they are large enough to completely engulf the previous five candlesticks. This formation of the candlesticks completed the bearish sushi roll pattern and indicated a bearish trend reversal. Soon after the indication, you can see the pair started to drop and moved lower towards 1.3600. 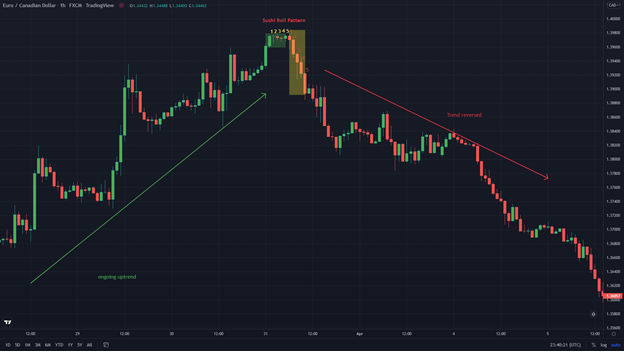 The sushi roll is a rare but strong reversal pattern. If it is used with a proper trade setup it can hugely favor the traders. To enter a sell trade using a bearish sushi roll pattern, it’s ideal to wait for a candlestick to close below the lowest low in the pattern. The stop-loss in this trade setup remains above the highest high of the pattern.

Likewise, to enter a buy trade using a bullish sushi roll pattern, it’s ideal to wait for a candlestick to close above the highest high in the pattern. The stop-loss in this trade setup remains below the lowest low in the pattern.

In both scenarios, traders may also adopt a more aggressive approach and enter the trade without waiting for a candlestick to close. Using the sushi roll pattern, take profit is usually determined by using a technical indicator such as a moving average or the RSI. Traders may also analyze the charts and scan for other chart patterns to determine the exit level.

Whether you are using the sushi roll pattern or not, you can check out ways to improve your trading with our list of winning trading systems here.