The pattern gets its name from its unique shape which resembles batman’s top cowl.

Chart patterns or simply price patterns help traders to analyze and predict the future price movement of a financial instrument. The chart patterns are mainly classified into continuation and reversal patterns.

Note: The batman chart pattern is a variation of the double top/bottom pattern and should not be confused with the Bat pattern which is a harmonic pattern.

The formation of the pattern starts with a strong bullish or bearish trend. The trend continues until the price hits a key support or resistance zone and retreats.

The second failed spike eventually causes the trend to reverse. So the making of the batman chart pattern can be described in five following steps

The Psychology of Batman Chart Pattern

The price changes represent the delicate balance between supply and demand and the batman stock chart pattern helps to understand that.

For example, in a bullish batman chart pattern, the first part shows the bulls are in control meaning there is high demand. The bears then intervene near a resistance zone and take the price lower which shows the market is well supplied around that level.

The bulls then retry to take control but fail and the price falls back into a consolidation phase which indicates a balanced supply and demand. However, The bulls make another attempt to regain control and fail again. The second failed attempt finally establishes an oversupplied zone and that causes the uptrend to reverse.

The following Microsoft (MSFT) chart signifies the importance of a bearish batman stock pattern. The share price had been rising from $84 until it hit the resistance zone and moved lower. Soon an upwards spike started that failed and created the left ear.

The price consolidated for some time before the second spike that also failed around $114 and created the right ear of the pattern. Following the right ear, the pattern was completed and the trend gradually reversed with the price falling to $94. 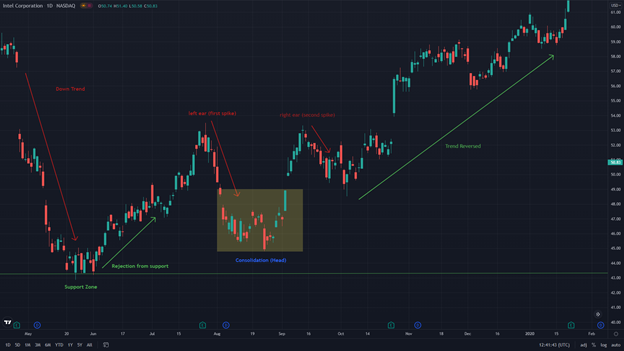 The following Intel Corporation (INTC) chart shows the effectiveness of the bullish batman stock pattern. The stock price had been falling from $60 until it hit the support zone and moved higher. Soon the first downwards spike started that failed and created the left ear.

The price then consolidated for some time before the downwards spike that also failed around $49 and created the right ear of the pattern.

Following the creation of the right ear, the pattern formation was completed and the downtrend trend reversed with the share price rising towards $61.

The first place to enter a trade using the batman chart pattern is at the right ear rejection. This is the most riskier entry because the trend reversal is not yet fully established.

The stop-loss in the scenario of a short trade will be above the key resistance area while for a long trade it will be below the key support area. The take profit is usually determined by analyzing the price action or with the help of a technical indicator like the RSI.