The Elder impulse system or EIS is a trading system named after its inventor Dr Alexander Elder. He was originally a psychiatrist and used these skills to understand trading psychology.

He has authored several bestselling books including Come into My Trading Room in which he introduced the Elder Impulse System. Elder is also known for developing many other trading techniques such as triple screen trading.

In financial markets, impulse refers to a strong movement in the direction of the prevailing trend. The idea of this trading system is to identify the point from where a trending market speeds up or slows down.

Identifying the impulsive points help the trader find the entry and exit levels and benefit from trading by following the trend.

How Does the Elder Impulse System Work?

The Elder Impulse System works by combining the trend direction and its momentum. For that, the system uses two technical indicators.

The first indicator is a 13-period EMA (Exponential Moving Average) and the second indicator is MACD (Moving Average Convergence and Divergence). The EMA is used to identify the trend direction while the MACD is used for measuring the momentum of the trend.

Moving average is a commonly used technical indicator that smooths out the price data by using constantly calculated average prices.

The MACD is a momentum indicator that also uses moving averages for its calculations. The MACD has two lines that are called the Signal line and MACD line. In addition to these lines, the MACD indicator also shows a histogram that graphs the changes between the MACD and Signal Line.

How to Read the Signal using the Elder Impulsive System?

The Elder Impulse System is used for both the bullish and bearish signals. The system indicates a bullish signal when the following two conditions are met

To understand more about the bullish signal, take a look at the following chart. The area marked as 1 shows the period in which EUR/CAD pair is in the downtrend.

The pair is keeping below the moving average and the histogram is also below the baseline. The area marked as 2 shows when the pair finally closed above the EMA line. About the same time, the histogram also turned green and moved above the baseline. This led to another couple of candles closing above the EMA line and confirmed the bullish signal. Following the signal, a huge rally can be observed on the chart. 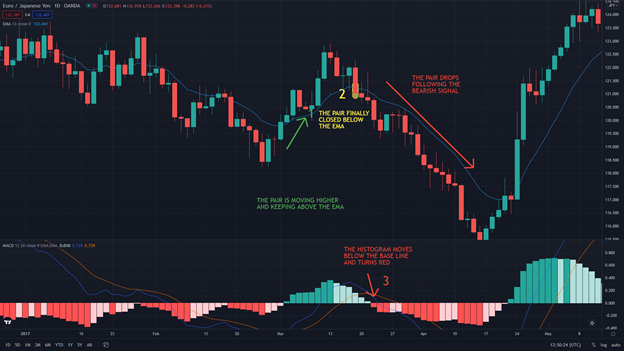 The Elder impulse system is also available as a pre-programmed indicator on several trading platforms. The indicator eliminates the need to add the MACD and EMA on the chart. The indicator makes it easy to read the signals and identify the neutral spots by looking at the candlestick colors.

On the following EUR/USD chart, the EIS indicator is applied which is showing candlesticks in three different colors. By default, the indicator uses the same parameters defined in the Elder impulse system. However, these parameters can be changed from the indicator settings. 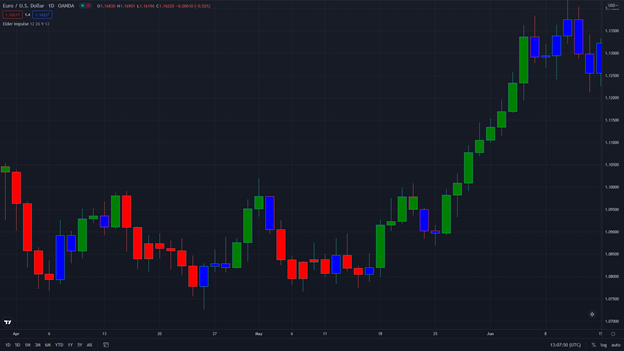 The Elder impulsive system is a simple yet powerful trading system. However, like any other trading system, the EIS also requires a set of rules to buy or sell.

A buy signal typically occurs when the current price is above the EMA and the MACD histogram is above the baseline. However, before placing a buy trade a trader should also follow the two rules mentioned below for even better results.

Likewise, before placing a sell trade a trader should follow the two rules described below

The two candlesticks closing above or below the EMA provide an additional confirmation on the direction of the direction. Similarly, the bigger histogram bars indicate a strong momentum which ensures a timely exit from the trades.

The timeframe plays an important role in any trading system. The Elder impulse system works on any timeframe but to reduce the risk traders should never ignore the overall trend direction on a bigger timeframe.

Elder recommends first setting up the system using an intermediate timeframe and then multiplying that timeframe by 5 to get the long-term timeframe. For instance, you can use a 65-period EMA which is five times the original 13-period EMA. This will indeed provide a better sense of the market direction over a longer timeframe.

The rule to multiply the intermediate timeframe by 5 is not a clear-cut rule and the traders must also use their judgment to analyze the trend. Traders can also combine other indicators like the RSI and volume indicator with the Elder impulse system to establish the trend.

How to Trade the US Tech 100
What Does A "Dovish Fed" Mean?
Is Pattern Day Trading Illegal?